There is a direct train from Amsterdam Schiphol Airport to Utrecht in approximately 30 minutes. The conference venue is located within walking distance from Utrecht Central Station.

Utrecht is seen as one of the most thriving and charming cities in the Netherlands, with a vibrant cultural life, plenty of places to eat and drink, and a rich architectural legacy. Utrecht has a history stretching back 2,000 years. In fact, Utrecht University was founded on the site of a first-century Roman ‘castellum’. The city is famous for its canals and for the Dom Tower, but it also hosts a wide range of fascinating museums and fashionable shops. Its medieval city center is small enough to explore on foot. Last but not least, Utrecht is located right in the middle of the country, so the whole of the Netherlands is just a short journey away. 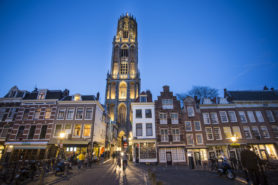